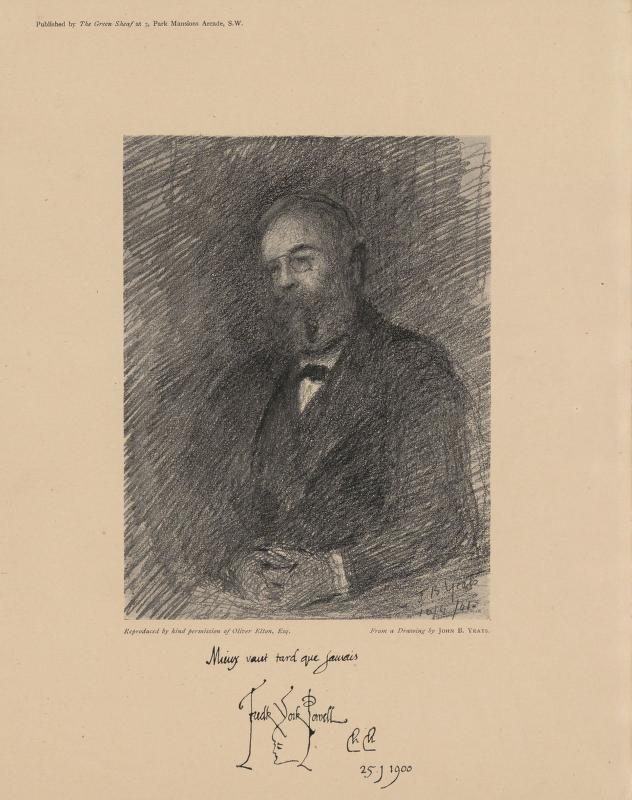 Yeats, John. Frederick York Powell. Drawing reproduced in the Supplement to The Green Sheaf, No. 13, 1904, by the kind permission of Oliver Elton.

Usually counted among the first generation of rigorously academic historians in Britain, Frederick York Powell is also usefully situated within fin-de-siècle networks of artists, folklorists, poets and scholars, many of whom contributed to the little magazines of the period. He was born 14 January 1850 in London, the son of Mary Powell (née York) and her husband Frederick, who was in the grocery business. Powell studied at Rugby; before going to Oxford in 1868 he spent two years travelling through Europe, where he developed an interest in the languages and literatures of Scandinavia. He was an agnostic and a socialist, and in later life a proponent of Britain’s imperial ambitions. His Oxford degree was in law and modern history (1872). Called to the bar in 1874, he was appointed to a lectureship in law at Christ Church, one of the Oxford colleges, the same year. Although he neither practiced law nor was particularly enthusiastic about teaching it, he spent twenty years lecturing on the subject, along with political economy, mostly to uncongenial undergraduates. Powell’s marriage also took place in 1874. His wife was Florence Batten, née Silke (d. 1888). Their family, including Florence’s two daughters by her previous marriage and their daughter Mariella (born 1884), lived in London, in the bohemian Chiswick suburb of Bedford Park. Powell commuted to Oxford during the week, keeping up an ambitious program of historical research interspersed with writing numerous occasional pieces such as reviews and prefaces, while maintaining a wide circle of friends, collaborators, colleagues, and students.

Powell’s contemporary reputation was for scholarship in medieval history and literature, but in the twenty-first century most of those works have been discredited or superseded. What remains is an engaging personality whose eclectic interests resonate with studies of the literary and intellectual culture of the 1890s. His collaboration with the Icelandic scholar Gudbrand Vigfusson (1827-1889) resulted in a number of important works that brought Nordic scholarship into conversation with the interests of British readers, both scholars and generalists. His friendship with the distinguished historian Mandell Creighton led to an invitation to contribute a volume, Early England to the Norman Conquest (1876), to the series “Epochs of English History,” published by Longman for use in schools. This friendship also brought Powell into the circle of historians who campaigned to initiate, for the historical discipline, the journal that in 1886 became the English Historical Review. He spoke vehemently about the scientific (as opposed to literary or ethical) nature of history and its place as a university-based research discipline, most notably in a preface to Introduction to the Study of History by Charles Victor Langlois and Charles Seignobos (1898). And he was appointed in 1894, on the recommendation of the Prime Minister, to the prestigious post of Regius Professor of History at Oxford. However, Powell’s own contributions to the discipline did not take the form of research monographs or learned articles. He was primarily a translator and editor, but also a prolific author of school histories for children and a promoter of archival training. It is worth noting, too, that he did not share with historian-colleagues such as Edward A. Freeman (1823-1892) the kind of racist theorizing about the “Teutonic” origins of Englishness that shaped so much of the popular, as well as scholarly, historical writing of the time (Wilkins 27).

While Powell’s connections among the historians, and his role in shepherding historical works through the Oxford University Press, are well known, his relationships with many of the literary and artistic people who contributed to the little magazines are not. He knew William Morris (1834-1896) and H. G. Wells (1866-1946). Oliver Elton’s biography of Powell reveals extensive correspondences and close friendships with R. A. M. Stevenson (1847-1900) and Jack B. Yeats (1871-1957), both neighbours in Bedford Park along with John Todhunter (1839-1916), William Rothenstein (1872-1945), Rosamund Marriott Watson (aka Graham R. Tomson) (1860-1911), H. R. Marriott-Watson (1863-1921) and Elkin Mathews (1851-1921). In the late 1890s, during an afternoon spent with Yeats and Mathews, Powell designed a publisher’s device for Mathews’ “Vigo Cabinet Series” and Yeats then made a sketch of Powell – probably the one reproduced above (Weimerskirch 119). Todhunter (1839-1916) wrote an affectionate memoir of Powell that was published in the final volume of The Green Sheaf along with an account of one of Powell’s dreams, “A Horror of the House of Dreams.”

Powell is both a named author and a recognized individual in the little magazines of the 1890s. In 1891 his transcription of a poem by William Blake was published, with a preface, in The Hobby Horse (Elton 133). In 1903 he was suggesting poems to Jack Yeats for illustration in A Broad Sheet (Elton 379). Among the titles included in Yellow Nineties 2.0, he contributed to The Pageant and The Green Sheaf. He is mentioned in The Savoy, in Paul Verlaine’s “My Visit to London,” a visit that continued next day in Oxford with lunch companions Rothenstein, the poet Elzéar Bonnier (1849-1916) and Powell. Powell’s first contribution to The Pageant was an essay on the “Pomeranian [Prussian] pastor” and novelist Wilhelm Meinhold (1797-1851) in 1896. Powell compares Meinhold favourably with major English novelists and praises the author’s ability to “enter easily into the very life and feeling of the past.” For The Pageant’s second volume, he translated (or to use his own terminology, “did into English”) some of the poetry of Omar Khayyam (1048-1131), the Persian polymath. This was part of the contemporary orientalist practice, most closely associated with Edward Fitzgerald (1809-1883), of translating and attributing quatrains of The Rubaiyat of Omar Khayyam. In 1904, the year of his death, Powell was president of the Folklore Society, an interest he shared with Pamela Colman Smith, editor of The Green Sheaf, where he contributed another translation, this time of Guiraut de Bornelh (1138-1215), the medieval troubadour.

His biographer observed that Powell “printed his best things in penny papers without his name, often not even seeing what was printed, or in limited issues of private editions or rare magazines that soon perished. Or he did not print them at all” (Elton 106). A full bibliography of these occasional writings would include extensive contributions to a wide range of periodical publications (especially the Academy and the Manchester Guardian) as well as to the little magazines.

Powell worked collaboratively, not only with Vigfusson, but also with Elton and with many other students and colleagues. Powell’s generosity to friends and colleagues, and a sense of his prolific (and now obscure) output, can be captured by highlighting his contributions as a writer of prefaces. Among many examples may be noted his preface to Langlois and Seignobos in 1898; to the American historian Charles Beard’s first book, The Industrial Revolution, in 1901; and to the catalogue of an exhibition held at the Baillie Gallery in 1903, of Pamela Colman Smith’s drawings. As part of his role as a Delegate of the Oxford University Press, Powell not only commissioned various works of history but also contributed prefaces to several of them (Rait 487).

Powell died aged 54 of heart disease, on 8 May 1904. Todhunter recalled in The Green Sheaf that Powell’s “laugh was like the laugh of a Viking – a courage-kindling laugh,” and observed that he “might have passed with honours an examination on things in general.” But Todhunter had to admit that his friend was “an unconventional Don of Christchurch” and “an unusual Regius Professor of History.”