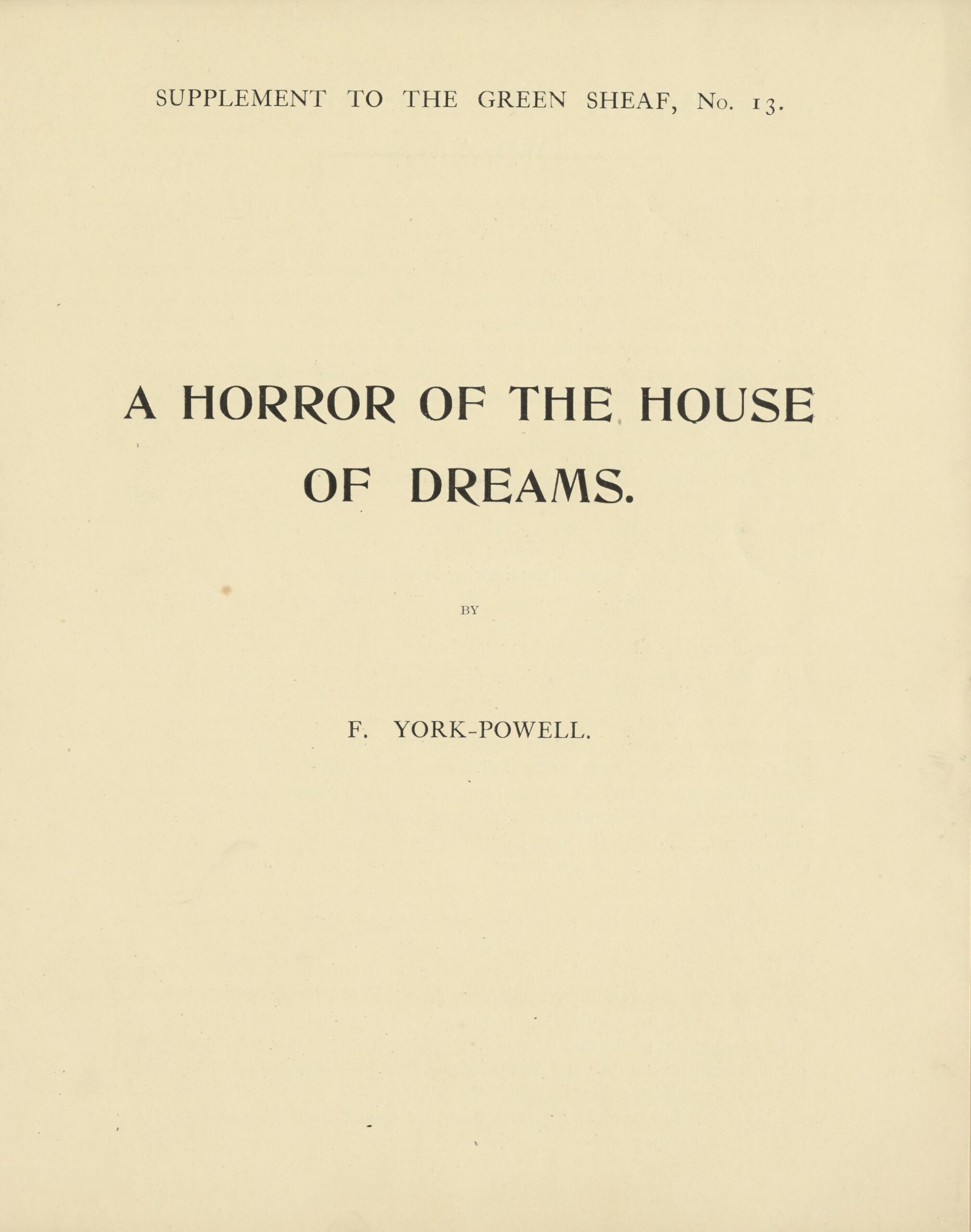 A HORROR OF THE HOUSE OF
DREAMS.

I was staying for the first time at the country house of an old friend, whom I had
not seen for years. It was late in the evening, and we were sitting in the smoking-
room having a last pipe together before we went to bed. The room was panelled
with dark wood, and the furniture was old. I felt sleepy as my friend talked, and
gave him but short answers. Gradually I became conscious of an unpleasant
feeling of vague discomfort, for which I could not account. This grew upon me
more and more, till my sleepiness fell off me, and I began to wish that my friend
would propose our going to bed. A feeling of fear, which seemed in some
mysterious way to grow into a sense of something uncanny in the room itself, was,
in fact, gradually mastering me.

As I was trying to find some excuse for escaping, there was a knock at the
door, and my friend’s butler came in with spirits and tumblers. He was an oldish
man, who had been long in the family. We spoke to him, and my friend asked
him to sit down and have a glass of spirits and water with us, which he did. After
a little more talk we got up, intending to go to bed. The smoking-room was on
the first floor, at one end of a long drawing-room, into which it opened by a door,
a second door leading to a landing. We all went out on to this landing, where
the candles were; but as I was turning to the great oak staircase, my friend
suggested that we should go and say good-night to his aunt. I agreed, and we
went back into the smoking-room, and through the long drawing-room, which I
could see by the moonlight, the blinds being up in three or four tall windows,
though the moon itself was not visible. As we passed these windows I could see
the gardens, and a misty meadow beyond, against which the small, black, clipped
trees of the terrace showed hard and distinct. The furniture was of the beginning
of the nineteenth century—a harp, a large old-fashioned piano, chairs with flowered
tapestry seats, and a light carpet with large flowers. There was a white marble
mantelpiece, and the walls were painted in dark reddish-brown distemper, which
seemed a little faded. A few water-colours were hung at wide intervals upon the
walls.

Passing through this room close under the windows, and through a door
opposite to that by which we had entered, we came into a boudoir, just like the
smoking-room in shape and size, but furnished in the same old-fashioned style as
the drawing-room, and lit by two large windows, in one of which the blinds were
up. There were two candles burning on a little table, and a fire in the grate, in
front of which sat a pleasant-Iooking old lady with grey hair, in a lace cap and
purplish satin dress. A maid with a baby in her arms was sitting at the side of
the room opposite the door by which we had come in. I was introduced to the
old lady, sat down beside her, and we began talking, our faces to the fire, our
backs to the candles.

I had totally forgotten my feeling of discomfort, and was interested in our
conversation, when 1 noticed that the light in the room had become dim. The
glow died out of the fire, leaving it dull; and when I looked round the candle
flames had dwindled to the blue. I stood up, and saw my friend and the butler
standing together at the door, holding it ajar, and craning their heads round it to
look into the drawing-room, whence a bright light proceeded and fell flatly about
their feet. I ran up to them. “What is it?” I asked; but they motioned me
back. “You had better not look!” said my friend, in a curious, tuneless voice,
tense with suppressed irritation. “Oh, nonsense!” said I, “I want to see!”
Pushing past them, I went into the drawing-room ; and there, a few paces in front
of me, I saw a spare old gentleman in a dress of the time of George II., pale blue
coat, pale yellow breeches, silk stockings, buckled shoes, and ruffled wrists. He
stood in a pantaloon-like attitude, in his right hand a thin, polished, brown
walking-stick, which seemed to me of about the fineness of the thin end of a
billiard cue. 1 could see nothing of his face; but the end of his nose, which must
have been long, was just visible beyond the profile of his cheek. He stood in the
midst of an oval of light on the floor, very like that gleam which I have since
noticed thrown by a tricycle lamp upon a dark road, but sharper in its outlines.

He walked slowly along to the wall, his footsteps making no sound; and as
he drew near the side of the room, I observed that wherever the oval of light passed
across the floor, or mounted up the wall, the decoration changed to an earlier
style. The wall within the light now appeared a pale green, with panels of pale
tinted landscape, bordered by rococo scroll work. In the centre, at the bottom of
a panel, I could see the figure of a nymph reclining among reeds. The old gentle-
man stood before this panel, raised his stick, and rapped the centre of the tuft of
reeds with such irritable violence that the stick snapped, and about eight inches of
it fell on the floor; but all this without making the slightest noise. Immediately
afterwards the light went out, and the decoration fell back into the flat red tint of
the distemper. But I had kept my eyes fixed on the exact spot upon which the
old gentleman had rapped, and, running forward to the wall, 1 clapped my hand
on the place, which now showed like a grease spot, a little darker than the rest of
the wall. “There, there!” I cried out; “if you break into the wall to-morrow you
are sure to find something.”

I turned excitedly towards my friend,, who I thought had followed me; but I
saw that he was still standing with the butler half behind the door. Between me
and them I could see no one; only, on the floor between me and them, flitting silently
about, were two small ovals of light. I knew that these marked the
soundless footsteps of the old gentleman, now become invisible.

A horror, such as I had felt in the smoking-room, now suddenly again fell
upon me; but in far greater force. How I got back, past those gleaming footprints
as they moved silently about—back to the boudoir—I don’t know. I only
remember that I found myself standing by the fire, near the old lady, who had
risen to her feet. I kept looking round at the window, wondering whether it would
be possible to escape through it; but I judged the height, at least twenty feet from
the ground, too great for such a venture.

My friend and the butler were still at the door; and again I saw the great
flat light, now brighter than ever, at their feet. They were as terror-stricken as I
was myself. “What shall we do?” I heard someone say; and after a minute of
silence my friend and the old lady began reciting with earnest but shaken voices
some versicles of the Litany.

For a moment I thought perhaps their prayers might avail us, for the light
seemed to ebb from the doorway; but at the end of the second verse I was com-
pletely panic-stricken as I heard the words, “Good Lord, deliver us!” slowly and
distinctly repeated in a grating, mocking, old man’s voice, which came from the
other room; and, with this venomous echo still in my ears, I woke.

magazine_texts The Green Sheaf 13 Supplement. A Horror of the House of Dreams F. York-Powell 1904 Fiction