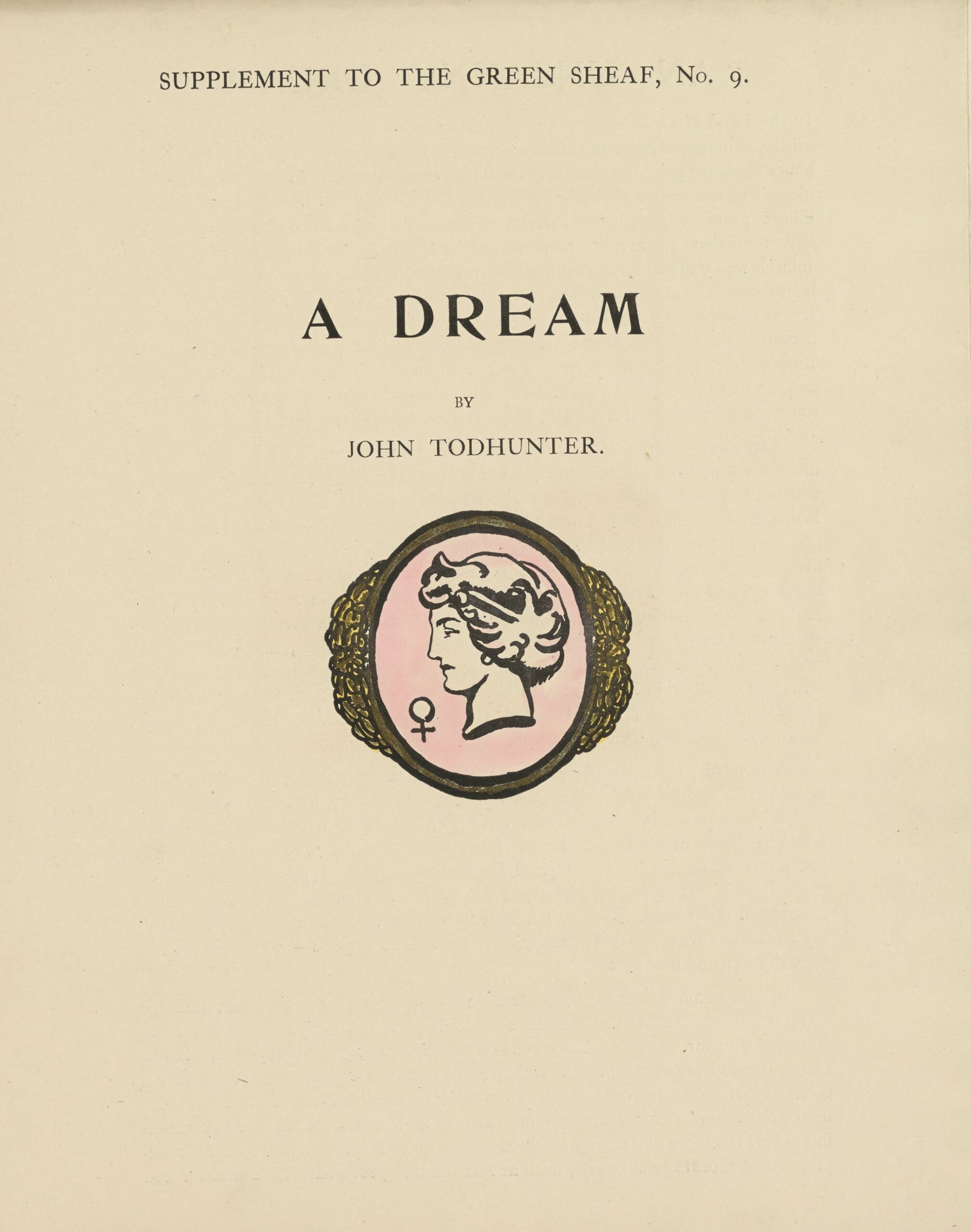 In the Land of Dreams there are as many regions as the dreamer has person-
alities, submerged beneath that which he looks upon as his own. In his waking
hours these personalities may apparently be fused into one. In his dreams he finds
himself at the mercy of the one dominant for the time, which he then seems to
inhabit; and each has its own world, or region, for the scene of its adventures̵a
region unknown by day, but remembered in dreams. One may for years fitfully inhabit
many different personalities in turn; and when a dream begins there may
be a moment of doubt and bewilderment, and the question is asked: “ ho am
I, and where am I?” But after a while the region grows familiar, and with it the
personality; and the dream-memory pieces together the sections of the serial
story of which this is the scene. I have had many of these serial dreams, some
coming to a climax, and then ceasing; others abortive, withering away like a plant
too weak to flower. Here is one which tormented me for years.

I was in the studio of an Italian artist in Rome, where, after he had shown
me some studies of his own, my eye fell upon a large picture, veiled by a curtain,
which stood on an easel in one corner. On my asking to be allowed to see it, he
looked at me for a moment, and I caught a slightly cynical expression in his eyes
and on his lips as he drew back the curtain. It was an Italian picture of the late
fifteenth century, in an elaborate frame of the same period: a Crucifixion, with
the Magdalen kneeling, or rather crouching, at the foot of the cross, and the Virgin
and St. John standing at either side. It was painted in the hard style, and some-
what crude colour, of a Ferrarese of the school of Mantegna, and much in the
manner of Cosimo Tura; and there was something grotesque in the naive repre-
sentation of suffering in the faces of Christ, the Virgin, and St. John; that of the
Magdalen was not seen. As I looked, the picture seemed to flicker, the figures
became indistinct, and the curtain was hastily drawn.

Afterwards, I saw the picture many times, in many dreams; in studios, on the
walls of old Italian palaces, in exhibitions in England; sometimes as a vague
vision, sometimes more distinctly; but always flickering in a tantalizing way when
I looked closely at the faces. I came to hate and dread it more and more; yet it
had a terrible fascination for me, and I was always trying to get possession of it.
Sometimes it was given me, sometimes I bought it, sometimes it came to me, I
cannot tell how; but it never remained long with me. It would disappear when
my back was turned, or if I attempted to show it to anyone—to reappear unex-
pectedly in some new place.

In one dream I was in the central hall of a great house of glass, like the
Crystal Palace. Off one of the aisles a double staircase, hung with scarlet cloth
trimmed with fur, led up to a landing from which a picture gallery opened. In one
of the rooms I found the picture, which I was not then expecting to see, among a
collection of modern paintings. I had now come to dread the sight of it, with
unutterable horror and loathing; for each time I saw it, while the fascination
increased, the faces of the figures became more and more horrible in their ex-
pression of mocking malignity; until at last the thing seemed to live with an evil
life—a vile and blasphemous caricature of the tragedy of Redemption, in which
the parts were played by devils. The Magdalen’s face was still unseen; but I felt
that the last horror was yet to come—if she should look round? The secret of
the picture’s fascination was in the thought of that; if she should turn and gaze at
me from the foot of the cross, where she crouched with her glittering, flickering
hair! With this mysterious fascination upon me, I went back to the first room,
where I had seen a clerk at a table, with a priced catalogue. I spoke to him,
described the picture, asked him the price, and was ready to offer anything to
secure it. He seemed surprised, assured me there was no such picture in the exhibi-
tion; and I hurried back with him to the room in which I had seen it. It was
gone; and in its absence I felt an ecstatic sense of relief—escape.

At last, in a subsequent dream, I found myself rushing over the sea on the
back of a huge sea monster, and suddenly I saw, sitting face to face with me, a
young man with a handsome dark Italian face, looking at me with lustrous amber-
brown eyes out of the shadow of a huge black hat with upturned brim. His
dark-brown hair fell in crisp curls to his shoulders, and he wore a rather shabby
jerkin and breeches of black velvet, and long brown leather boots coming up to
his knees. He looked at me with a mocking smile on his lips, which made his dark
moustache curl slightly upward at the ends. He was, I knew, the painter of the
picture; and without a word passing between us, 1 understood the reason of his
presence. He took a piece of white paste from his pocket, rubbed it between his
palms, worked it with his fingers like wax, and with a tiny steel modelling-tool
fashioned it into a kind of medallion, with a face—a beautiful woman’s face—in
profile upon it. This he set in an antique gold ring, which he put on my finger.

Then the scene changed. I was in a gloomy pine-forest, which I knew to be
the Pineta of Ravenna. I knew also that the ring would lead me to the
picture. The moon was somewhere, but not visible, and I was oppressed by the
gloom of the forest. I forced my way through a dense underwood of bushes and
young pines, and at last came to the mouth of a cavern, absolutely dark, and full
of sulphurous vapour. Into this I plunged, and after struggling on for a fearful
time, half smothered by the fumes, I saw a gleam of light in the distance, and at
length came out upon the shore of the Adriatic, and felt the cool night air once
more. Upon a patch of smooth grass at the edge of the sandy beach, over which
tiny waves were lazily rippling, I saw a little chapel with a gabled belfry, dark
against the sky, where the moon shone through light clouds. I was drawn by some
hideous fascination to this chapel, which stood north and south, not east and west.
The door was at the southern end, and was locked and bolted. I felt that if I
were to touch the bolts with the ring, the door would open, and I should be
delivered into the power of the picture. My hand moved of itself to touch them;
but I made a last despairing effort, tore off the ring, and flung it away.

I knew that if I dreamed it to the end
That dream were death—I knew that if I saw
The face that faltered as I did contend
With swimming vapours in the cavern’s maw,
That sight were—