No. 3 contains a story, “Anthony Garstin’s Courtship,” by Hubert Crackanthorpe, the first of three articles on “William Blake and his Illustrations to the Divine Comedy,” by W. B. Yeats, with important unpublished drawings by Blake, the second of three articles on Friedrich Nietzsche by Havelock Ellis, and literary contributions by George Moore, Edward Carpenter, Ernest Dowson, R. Mathieu-Wierz- binski, Edgar Prestage, Aubrey Beardsley, and the Editor. The illustrations include work by William Blake, C. H. Shannon, Max Beerbohm, and Aubrey Beardsley.
Crown 4to, bound in new pictorial wrapper, 2 s.

EXTRACTS FROM PRESS NOTICES ON No. 4 OF “THE SAVOY.”

“I begin to believe that ‘The Savoy’ has a future. . . . The Savoyards have taken seriously to literature, Mr. Symons alone keeping steadily to his old manner. Altogether, this is an issue whose promoters need have no fear of criticism. This time, at any rate, it has gone ahead of its rival, the ‘Yellow Book .’”—Weekly Sun.
“All praise is due to the initiator of this very original magazine, which attempts to provide in England a journal which shall only contain what is admirable and what is beautiful. Very charming and restrained, too, is the lithograph, ‘The Novel,’ by Mr. T. R. Way; the wood-engraving, after Mr. Charles Conder’s design for a frontispiece to Balzac’s ‘La Fille aux Yeux d’Or,’ is admirable. In the literary contents of the number there is an abundance of good things. To name the writers merely would be sufficient guarantee that such was the case, but the interest of the subjects with which they deal, too, has to be considered.”—Birmingham Gazette.

Nocturnes and Pastorals.    Poems by A. Bernard Miall.

Four Hundred copies on Large Post 8vo deckle-edged paper, bound in dark green cloth, at Five Shillings net per copy. Printed at the Chiswick Press.
“The clearness and daintiness of many of his verse pictures remind one of the silver-point in a kindred art. . . . One of the prettiest and sincerest books of verse that have come from the press for some time.”—Glasgow Herald.
“A series of impressive sonnets. . . . brings to a conclusion a volume that shows throughout a studiously cultivated gift.”— Scotsman.
“A book which vibrates from cover to cover with poetry which has been genuinely felt and spontaneously uttered.”— Mr. Richard Le Gallienne, in The Star.

Second edition. Carefully revised and enlarged by the addition of Nineteen New Poems. Uniform in style with “London Nights.” 400 Small Paper copies at Five Shillings net per copy ; and 15 Large Paper copies at One Guinea net per copy. Printed at the Chiswick Press. [Small Paper edition entirely out of print: only a few copies of the Large Paper edition remain.]
“To many Mr. Symons may appear a mystic and a dreamer, to us he is a modern minstrel, a troubadour of the times, with a subtly sweet note of song, which has a cadence and a lilt that linger in the memory like the flash of a fountain in the Temple on the one hand, or the distant murmur of a mountain stream on the other .”—The Newsagent.

The Rape of the Lock.    By Alexander Pope.
Illustrated by Aubrey Beardsley.

Édition de Luxe of the above famous Poem, printed at the Chiswick Press, in Crown 4to size, on old style paper, illustrated with nine elaborate drawings by Mr. Aubrey Beardsley, and bound in a specially designed cloth cover. Limited edition, price Ten Shillings and Sixpence net per copy. Twenty-five copies on Japanese Vellum, at Two Guineas net per copy. [Large Paper edition out of print.]

Two Hundred and Fifty Small Paper copies on Foolscap 8vo deckle-edged paper, bound in cream-coloured art linen, at Five Shillings net per copy; and 10 copies printed on Japanese Vellum, at One Guinea net per copy. Printed at the Chiswick Press.

One Hundred copies on Foolscap 8vo hand-made paper, bound in parchment, at Five Shillings net per copy ; and 20 copies on Japanese Vellum, in similar binding, at One Guinea net per copy.

Three Hundred Small Paper copies on hand-made paper, Imperial i6mo, bound in Japanese Vellum, with cover design by Aubrey Beardsley, at Six Shillings net per copy; and 30 Large Paper copies printed on Japanese Vellum, at One Guinea net per copy. Printed at the Chiswick Press.
“Mr Dowson has a genuine talent. Indeed he has several talents. A classic propriety of epithet, rising at moments to remarkable distinction; a full, rich melody, and . . . . an occasional dignity and thought of feeling. — The Daily Courier.

THE ONLY RELIABLE WORK ON THE SUBJECT IN THE ENGLISH LANGUAGE.

The Life and Times of Madame Du Barry.
By Robert B. Douglas.
A limited edition in one volume, with a portrait of Madame Du Barry finely engraved upon wood, 394 pages, Demy 8vo, bound in blue cloth with armorial cover design by Aubrey Beardsley, at Sixteen Shillings net per copy.
“Mr. Douglas has produced a volume every line of which I read with keen interest. It is a singularly vivid and life-like picture of what life in the old French Court was like; and the portrait of the central figuie of the book is very clear and very telling.”— Mr. T. P. O’Connor in the Weekly Sun.
“At a time when the book-market is flooded with translations of forgotten and apocryphal French Memoirs, it is something to meet with a newly-published biography of a French celebrity which is what it pretends to be . . . . and is a book of fascinating interest .”—Daily News.

The Fool and his Heart; being the plainly told
Story of Basil Thimm. A Novel by F. Norreys Connell, Author of “In the Green Park,” “The House of the Strange Woman,” etc.

“One of the wittiest, one of the queerest, . . . . and one of the most amusing novels. Father Greenwood is a noble study of the religious character.”— Morning.
“Basil Thimm’s adventures are narrated in a way which is often exceedingly vivid and interesting.”— Glasgow Herald.
“Mr. Connell has already shown a singular liking for the seamy side of life, and unusual power in dealing with it. ‘The Fool and his Heart’ has all the merits of his earlier work. There is the same vigorous and trenchant style, the same grim humour, and the same grasp of a few not very pleasing types of human nature. . . . A feature of the story is the use that Mr. Connell makes of Catholicism. . . . Full of incident and graphic touches. It should add to Mr. Connell’s reputation.”— Scotsman.

IN THE PRESS: READY IN OCTOBER NEXT.

AMORIS VICTIMA, A Poem by Arthur Symons. 400 Small Paper copies and 25 Large Paper copies. Uniform in style and price with “London Nights.”
THE PIERROT OF THE MINUTE. A Dramatic Phantasy by Ernest Dowson.
LA FILLE AUX YEUX D’OR. Translated from the French of Honoré de Balzac by Ernest Dowson, and illustrated with Six Designs by Charles Conder, finely engraved upon wood.
CARICATURES OF TWENTY-FIVE GENTLEMEN. By MaxBeerbohm. Finely engraved upon wood.
THE SOUVENIRS OF LEONARD, COIFFEUR TO QUEEN MARIE ANTOINETTE. Translated by Alexander Teixeira de Mattos.
A BOOK OF BARGAINS. Stories by Vincent O’Sullivan.
SELF-SEEKERS. A Novel by Andre Raffalovich. 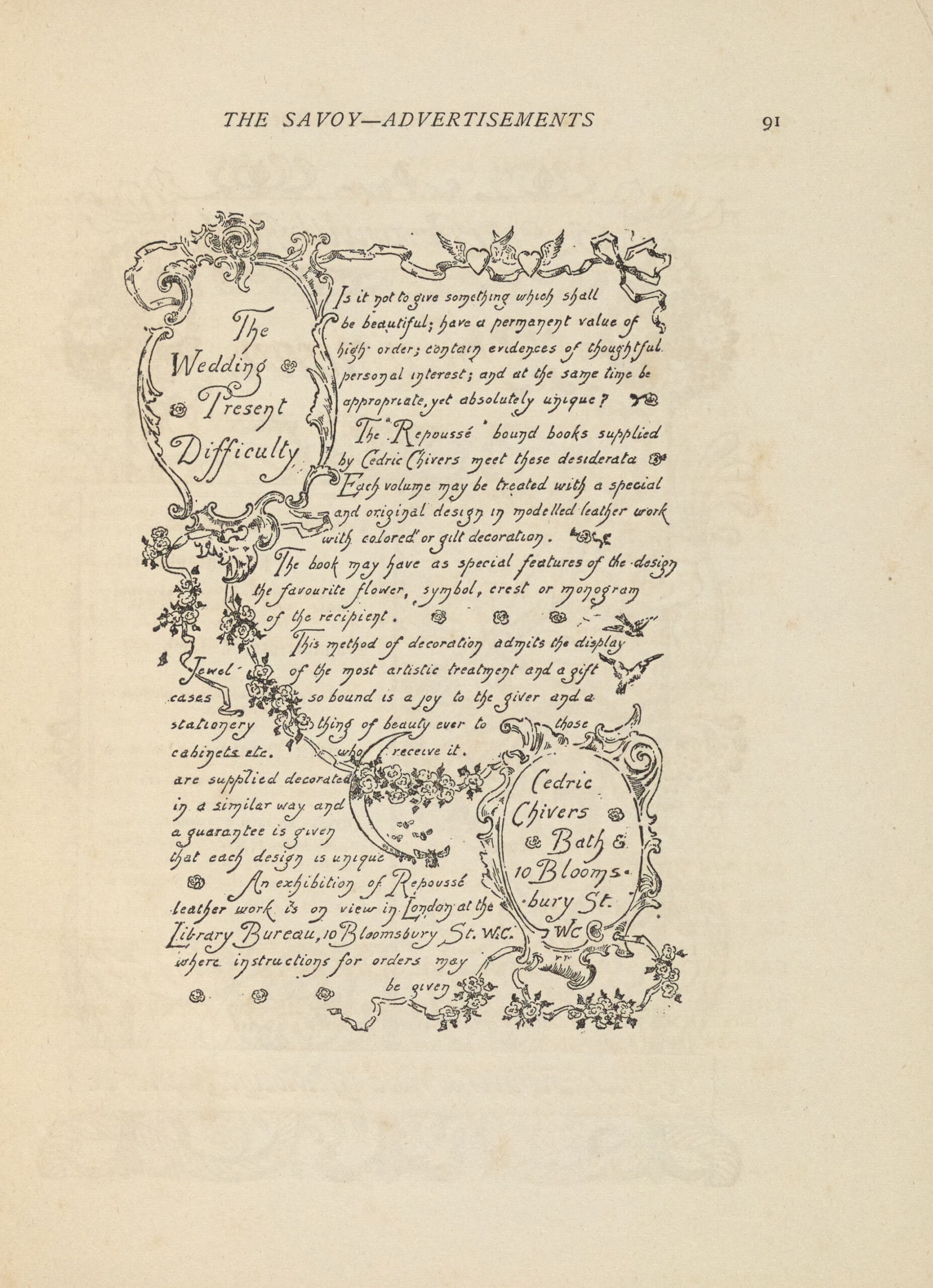