THE PICTURES OF GUSTAVE MOREAU 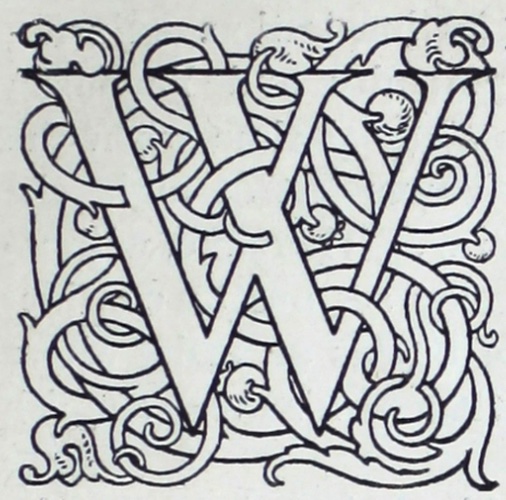 WHO has not suffered under the tyranny of
an insistent phrase from the street song of
the moment? or from the reiteration of a
foolish phrase? ‘The French Burne-Jones,’
for instance, is one that will intrude when
Moreau is mentioned. Such an inept com-
parison is degrading to both painters, and its
ghost must be laid. To apply a geographical
adjective to an artist is always a fatuous
substitute for criticism. A Belgian Shakespeare or a French Burne-
Jones—how pitifully meaningless each phrase is seen to be when you
face it boldly. For the essence of Burne-Jones is that he is Northern,
and of Moreau that he is Latin.

A Frenchman looks to the East through Rome; whether his gaze be
fixed on theology or art, he sees it through the atmosphere of the eternal
city. An Englishman regards Rome as an episode, and sometimes for-
gets even whether Greece inspired the Latins, or vice versâ. For Rome
to a Briton is not the outpost of his frontier whence he emerges in quest
of the dim past; it is not the beginning of his to-day, but one of the
twilights of dead yesterdays. He may travel to the Orient, whose
frontier is Greece, by sea; or, through the haunted forests of Germany
and down the Danube. His East is linked to him not by the Caesars,
nor the Popes, but by the Crusaders. His myths of Hellas reach
him more often by way of Chaucer or William Morris. That Venus
should masquerade as Our Lady of Pain, clad in broideries of mediæval
fashion, seems to him natural enough. Not so the Frenchman, who,
Latin by race, is still Latin in heart, and regards far off Greece and
more distant Egypt as the direct artistic progenitors of his forefathers
the Romans, by whom he claims a clear pedigree through the masters
of classic times, back to the East, the birthplace of knowledge.

Recognising this sharply defined distinction, you may trace the
art of Burne-Jones and Moreau to the same fountain-head, and find in
the brooding East the mother of all the mysteries each delights to re-
edify; but the two streams only meet at the source. Over the waters
of the one still hangs the heavy-scented incense cloud of the Middle
Ages; the other flows azure and sparkling from springs fed by the dews
from the mystic rose of Persia, from lotus-pools of Ind, and from
Hellenic brooks wherein Narcissus gazed.

For Moreau is the classic ideal, which is scholarly simplicity; al-
though
6

To these may be added the series of designs for the fables of La
Fontaine which were admirably described in an illustrated paper in The
Magazine of Art.1 Reproductions of these sixty-four water-colours
nominally intended to illustrate La Fontaine are not yet accessible in
volume form, but many single pictures have been admirably etched by
Bracquemond. Mr. Claude Phillips sees in them a distinctly strong trace
of Persian influence, which, unlike Japanese, does not concern itself
with the purely exterior manifestation of humanity and the outer
world, but is distinguished by supreme calm, devoid of violent action,
assisted by a severe life and tempered passions. Possibly it would be
still more accurate to call this influence Hindoo-Greek, for although
both sprang, doubtless, from the same source, it is the latter develop-
ment which Moreau feels. But in the exquisitely delicate tracery and
jewelled embroideries, that preserve a certain reticence in their splen-
dour, there is kinship to Persian fantasy. The text of La Fontaine,
with its beasts masquerading as men, its prim moralities and fossil anec-
dotes, fettered Moreau, who seems at times to have wearied of the effort.

The Head of Orpheus, which Ary Renan describes so charmingly,
has found an English critic, whose impression is so vividly expressed
that it were folly to try to put the idea in other words: ‘It is against
skies flushed by an aftermath of sun that recall for their touches of
orange and bands of brooding purple these words, Quelles violettes
frondaisons vont descendre—words so expressive of that hush in nature
become strange in expectation of some countersign pregnant for the
future—it is against a sky like this,’ he says, ‘that an all-persuasive
figure moves away; the head of Orpheus lies between her hands, and we
scarcely know if her fastidious dress, decked with so many outlandish
things, has been clasped to her waist and chaste throat in real
innocence of the burden she holds so mystically; but this hint of
sentiment is too slight, too fugitive, in the picture to become morbid.’
In The Birth of Venus, not included in M. Ary Renan’s list, we note
a curious influence of Pompeii. The figure of Venus, in the foreground,
floats in a shell, by way of boat, scarce conscious of the clamorous
worshippers on the distant beach who would fain attract her gaze;
through a cleft in the fantastic walls of rock that bound the coast you
catch a glimpse of a lovely country.
In

In the Hercules and Hydra, the central figure is, like that of the
Venus, singularly removed from the gross physical type so dear to
certain schools. It is a divine, not a fat Hercules; and the reality of the
monster terrifies one. The colouring of the picture—dark green with
blood-red in the sky and upon the ground—imparts a grim sense of
awe. The third picture illustrated, the Apparition, is strangely like
the Salome Dancing in its composition. In each the chief figure
stands to the left of the spectator; in each a silent warrior with his
mouth swathed in heavy drapery gazes mutely impassive; in each,
huge arches rise profound and mysterious; but apart from mere similarity
of composition the motif of either is utterly distinct. In the Apparition
the figure of Herod is at the side scarce noticeable. The tragedy is
but indirectly concerned with him; it is the instigator who is con-
founded by the spectral and transfigured head that rivets the attention
of one who sees the painting, no less than it appals the chief actor,
who is alone moved by the portent. In the Salome Dancing, the white
lily she holds as a sceptre seems to heighten the meaning of her
sorcery. The hanging lamps and the cathedral-like aspect of the vast
Asiatic interior, the brooding Herod who sits enthroned with grotesque
monsters in a hellish trinity above him, all assist to make the scene
suggest an impious travesty of the religion that was destined to
enshrine the incident. So stern is the purpose that not at first do you
realise the wealth of imagery which has been encrusted upon the
idea, or rather the complexity of aspect which the idea itself has
assumed in Moreau’s conception.

To describe in catalogue the works of Gustave Moreau already
mentioned would serve no purpose. If any one interested in his paint-
ing is unable to gain access to the pictures—and as they are mostly in
private hands it is extremely difficult to do so—he will find in the
various periodicals already mentioned descriptions of the most important.
In A Rebours, Huysmans has spoken at some length of the Apparition,
which was shown in England at the first Exhibition at the Grosvenor
Gallery. The story of Salomé has had a most lasting fascination for
Moreau. A third picture—a wonderful water-colour, that so far appears
to have escaped reproduction—which shows Salome returning with the
head of John the Baptist on a charger, conveys the same poetic under-
current we see in the Head of Orpheus. It is an echo of Heine’s terrible
Salomein Alta Troll.
Of

Of the Young Man and Death, with its ascription to Chassériau, of
the Plainte du Poète, reproductions are given in the Gazette des Beaux
Arts, and elsewhere; but none of these do more than suggest and
then only to those familiar with the originals—the scheme of colour
which Moreau usually employs. His favourite harmony is in blues
verging on peacock, merging into dark green, with rather hot browns
and a liberal use of crimsons and old-gold colour. The flesh tones are
inclined to be cadaverous; the draperies are often polychromatic, not
‘shot’ like those of Burne-Jones, but in layers of different hues.
Bowers of clipped foliage, the lotus, the iris, and gum-cistus, lilies and
roses, branches of coral and sea-plants, are frequent accessories. As
Burne-Jones loves to depict metals, so Moreau delights in enamelled
surfaces. To attempt to convey his manner in a sentence is not easy;
perhaps to say that he is a cross between Mantegna and Delacroix
might convey some idea of his colour, but his blues are quite unlike
those of either master.

But this chance comparison with Burne-Jones is merely for explana-
tory purposes. For to appreciate one painter by linking him with
another—the eternal match-making of the elderly—is at once a failure
and an unintentional insult. The one distinct patent of nobility for an
artist is that he shall hide a superb pedigree by the still more noble
title won by his own prowess. The more you study Moreau, the more
you feel he owes his manner, his style, his entire art, to Moreau and
Moreau only. In a distinctly limited manner he is not merely
supreme, but an autocrat with no power behind the throne. The
new personality of his invention is more and more apparent as you
attempt to discover the real artist. Like all princes he may employ
the universal language of courts, but he speaks as unreservedly as a
democrat; he does not hunt like Flaubert for the exact adjective, nor
weary himself by constant self-criticism. But the language he uses,
whether polished by the master of the past or created for his own
purpose, is strangely pregnant.