A NOTE ON ORIGINAL WOOD ENGRAVING 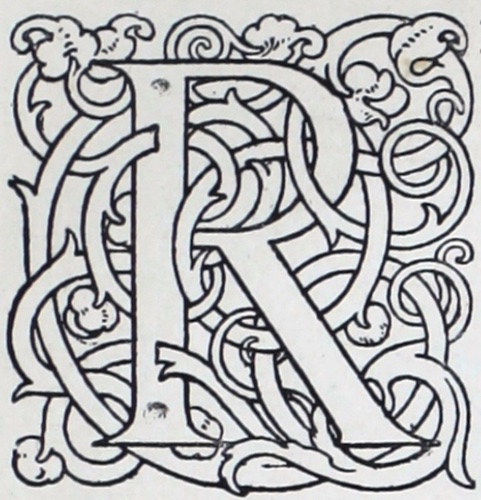 REVIEWING the tendencies of wood engraving,
it is well not to overlook those accidents of
origin that have sometimes thrust the art out
of its proper course, so that great technical
efforts have dwindled in the value of their
output. From the first, one of these evils
was the detached draughtsman, from whom
sprang an insistence upon the fashions in out-
line; the other element of failure at the root
was the interpreter, with his callousness, his lack of responsibility,
hence the great suggestive value of those few master-craftsmen who
were designers and engravers at once. The early makers of block-
prints were perhaps original engravers; with a rough sense of the
material to hand, they made good use of solid masses of wood, uncut
save for patterns in white of rude flower and leaf. But the ambi-
tion to emulate the drawn line was hard upon them; and early in
the development of the art the magnificent illustrations to The
Canticles show a conscious use of a flowing line, but so controlled by
the use of the engraver’s knife that the aspect remains cut, and cut
excellently.

Notably in Italy, many woodcuts so called were perhaps executed
on some kind of type metal, or pewter; that they were cast from
the wood for convenience in printing is however most probable. In
Florence an intelligent use of fretted black surfaces, even in the early
years of the sixteenth century, should be contrasted with the more
celebrated and earlier Venetian work, in which the wish to imitate a
drawn line, more or less successfully, tends in intention to the sacrifice
of the medium to purposes of the draughtsman. It may be doubted,
for many reasons, if such work was due to original craftsmen; but
relief engraving in Italy remained always a minor art, inferior to
the contemporary burin work, anonymous, eclectic, a pirate among
the inventions and achievements of others. The fruitful evidence of the
original craftsman, his range from the strong to the exquisite, belongs to
the northern arts, with which engraving had begun.

With the great German draughtsmen, who have made for us the
inheritance of magnificent prints, all so various, the manner of drawing
became somewhat modified, to meet the requirements of the engraver.
But, unlike the delicate French cuts published and perhaps executed
by Simon Vostre, unlike the still earlier blocks of the Netherlands, the
draughtsman’s
254

draughtsman’s flourish and cross-line play a dangerous role (the solid
masses had vanished long since), and we can trace out the moment at
which the pen-work became in part transformed by the processes of the
knife-man. Under the influence of Durer the professional knife-work
reached that pitch of manipulative excellence we all admire; with
good reasons on the whole, it is imagined that he executed himself
(though an advocate of engraving) not the mass of royal prints
signed by him, but only the little Agony in the Garden, in which
an inexperienced hand makes havoc of the intricacy and ‘colour’ of
the work.

As if in repentance for the neglect of the mass drawn upon with a
white incised line, the development of the Chiaroscuro method, first
matured in Germany, brings about a set of masterpieces, both there
and in Italy, in which interpreters’ work rises to the level of an art
indeed, and a transforming sense surpassed only by the colour prints
of Japan in the eighteenth century. With these masterpieces, however
the resources of the medium were not exhausted ; in the work of a
minor master, destined shortly to a front rank as an artist, as an en-
graver to the first and greatest place of all, namely Altdorfer, a new
charm of daintiness and light will be added to the vigour in handling
engraving had hitherto acquired. One may wonder that this delicate
artist should have been overshadowed not only by the great Durer, but
by a host of designers, such as Burgkmair and Aldergraver, to whom
Altdorfer’s graceful facility and sense of romance had been denied.
Nothing
256

Nothing can surpass the handling of Lutzelburger in Holbein’s
Dance of Death, if his knife-work elsewhere is not of that exceptional
quality. The bound and recoil of the reed-pen upon a hard surface,
partly replaced with Altdorfer by delicate cut lines, tends here perhaps
towards, greyness, but how precise and tender at once, how delicate,
next to the cold unequal work of Tory!

In the twilight of the art, Jegher, the interpreter of Rubens, will
evolve a new method, admirable and forcible enough; but once more
we
263

we are indebted for ‘intimate’ methods to Livens, a man of slight
reputation as a painter, remarkable only for his woodcuts. In his rare
prints we find no evidence of a trade trace in workmanship, though done
at a moment when professional expediency had prevailed. In the use
of line freely conceived and the quest of its resources he has merited
the hasty attribution of his few proofs in the past, and in perfect good
faith, to the great Rembrandt, also an experimentalist upon wood, but
occasionally, casually perhaps, without that subtlety and energy that a
mention of his line-work would conjure up. With Livens the handling
is full of poise and dignity, recalling in temper some of the fine portrait
studies by Mr. A. Legros. In the art of wood engraving they stand
alone.

Not to pause over the vignette designer and engraver Papillon,
whose quaint bright work, still done with the knife, does not rise to
past levels of art and design, we must overlook the origins of the graver
and its use, to come to the two Bewicks, or rather to William Bewick
and the new aspect of engraving in his hands. In landscape this
artist’s sense of mass in composition is not great, if in sentiment or aim
he sometimes claims attention; minute, detailed, without, however, a
very keen or vital sense of detail, his designs obtain by a merit of
cheerful patience, and something local in feeling, parochial perhaps.
His celebrated birds cannot be compared for life-likeness to the winged
creatures drawn by the old Italian Pisanello. They seem imitated too
carefully from stuffed specimens, never rising to the instantaneities of
motion that we will find even in unimportant Japanese prints. His
influence on trade methods in this country was very great, linger-
ing on with Clennel and Harvey, and declining in merit till pre-
Raphaelitism revived the use of line-work, interpreted, or rather copied,
by the engraver. Among Bewick’s followers, S. Williams had design-
ing powers beyond the merely entertaining trace of a fashion in illus-
tration. But, before the exhaustion of the Bewick fashion, wood
engraving in the hands of William Blake once more touched past
levels of attainment, and the stimulus of his little designs cut upon wood
should count in the revival of a bolder spirit in the art, apart from their
influence upon the exquisite prints by Calvert, made known to the
public only some few years ago. Tender yet incisive, these speci-
mens of original work may be compared to the most beautiful
proofs of the past, to the lovely and romantic cuts of Altdorfer, to
the noble portraits by Livens. With W. J. Linton, sometimes
a designer, the author of a valuable but arbitrary book on the
masters

masters of wood engraving, himself an influence upon the practice,
we find a survival of the old professional spirit at a time of artistic
transition. To his advocacy of the white line, however, more than to
his example, may be traced the efforts many years later to give new
life in America to interpretative engraving; but the fate of all such
work depends too much upon the matter to hand for its value to be
appraised. The transformation of the design by the medium, as with
Lutzelburger under the guidance of Holbein, or the German and Italian
chiaroscurists, or a Jegher, is replaced by a competition with fine
photogravure.

If the book illustrators of the sixties did not attempt to engrave
their work, they had interpreters whose value is at last being felt,
even abroad, where the revival of facsimile under Menzel’s direction has
seemed hitherto the last word in exquisite mimicry. In the waning of
the pre-Raphaelite wave over illustration, Mr. William Morris and some
friends made experiments to handle, with true engravers’ style, a set
of still unpublished designs by Sir Edward Burne-Jones. The three
little musicians on the title-page of The Earthly Paradise is in earlier
editions due to the cutting of Mr. Morris; the frontispiece by Rossetti
to the Goblin Market may pass for a fortunate specimen of such work.
How different in their curious blend of tentativeness with decision
are these racy little prints to the trace elsewhere of steel engraving
mannerisms it has been Mr. Linton’s purpose to praise!

Before the year 1889, with the exception of J. F. Millet’s experi-
ments, too soon forgotten, the interest now so common in France to
revive forgotten mediums lay very far indeed from most artists, both
there and in England. With Mr. Lucien Pissarro we have the forerunner
of modern French efforts in line and colour, and an influence upon the
contemporary manner, very frankly admitted by M. Lepere himself,
who may stand as the most accomplished of original French painter-
engravers. Unlike the young Englishmen included in this note, Mr.
Pissarro has done work in colour, both for Japanese water methods of
printing and for the oil method. An engraver in the modern sense, he
has also cut with the knife as a mediaeval or Japanese artist cut in
the past.

The output of Mr. T. Sturge Moore during the last seven years has
been considerable. Not to praise work whose ultimate purposes are
not fixed, I would point out that the style of original wood engraving
is not here merely accidental, as of a trade engraver who is artist at
his leisure, but in aim they show that directness of all work understood
within
266

within the peculiar conditions of a medium. They aim at effect brought
about by white cutting into black, or by black lines showing the work
of the tool in their shaping, and we have here no imitation of chalk or
wash drawing, or of steel engraving, or of photography.

In France no artist of greater distinction than M. Jeanniot has
made recent experiment in wood engraving. It is also good news
to hear that one English school at least (that of Birmingham) has
become conscious of the desirability of a revival. We may expect
shortly to see these first attempts in the pages of contemporary
magazines.