The Keeper of the Palace of Books said: ‘Queen Nitocris, the Fair One with the
Rosy Cheeks, widow of Papi I. of the Tenth Dynasty, to avenge the murder of
her brother, invited the conspirators to sup with her in an underground hall of her
Palace of Aznac. Then, leaving the hall, she suddenly caused it to be flooded with
the waters of the Nile.’—MANTHON. 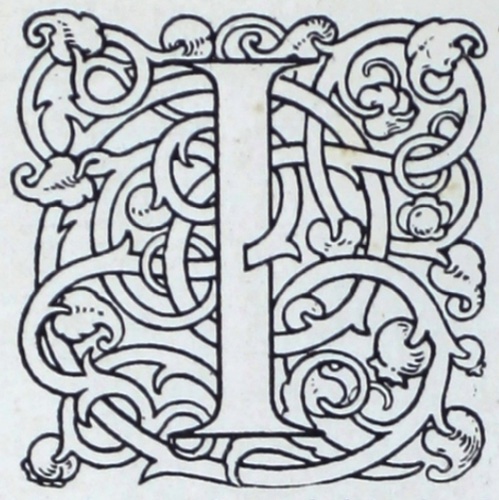 IN or about the year 1404—I go back so far
lest I should distress my contemporaries—
Ysabeau, wife to King Charles VI. and Regent
of France, abode in Paris at the old Hôtel
Montagu, a royal residence better known as
the Hotel Barbette.

There they planned the famous torchlight jousting-parties on the
Seine—gala nights, concerts, banquets, made marvellous by the beauty of
the women and the young nobles, and by the unequalled luxury displayed
by the Court.

The Queen had introduced those gowns à la gore in which the
bosom glanced through a network of ribands enriched with precious
stones, and those tall head-dresses which required that the centre-pieces
of the feudal gates should be raised by several cubits. In the daytime
the meeting-place of the courtiers was near the Louvre, in the great
hall and upon the terrace of orange-trees of Messire Escabala, the
King’s steward. Play ran high there, and at times the dice were cast
for stakes large enough to starve a province. They dissipated the
wealth of treasure which the thrifty Charles v. had been at such pains
to amass. As the coffers diminished, the tithes, tolls, statute-tasks, aids,
subsidies, seizures, exactions, and gabels were increased at will. Joy
reigned in every heart.

It was in those days, also, that John of Nevers, sullen, standing aloof,
making ready to abolish all those hateful taxes in his own States—John
of Nevers, Knight, Lord of Salines, Count of Flanders and Artois,
Count of Nevers, Baron of Réthel, Palatine of Mechlin, twice Peer of
France and Premier Peer, cousin to the King, a soldier destined to be
named by the Council of Constance the sole leader of armies who might
be obeyed blindly without fear of excommunication, Premier Grand
Feudatory of the Realm, first subject of the King (who himself is but
the first subject of the nation), Hereditary Duke of Burgundy, the
future hero of Nicopolis and of the victory of Hesbaie, in which,
deserted

deserted by the Flemings, he gained the heroic title of The Fearless in
presence of the whole army by delivering France from her principal
enemy—it was in those days, I was saying, that the son of Philip the
Bold and Margaret II., that John the Fearless, in a word, first began to
think of saving the country and of defying with fire and sword Henry
of Derby, Earl of Hereford and Lancaster, fifth of the name, King of
England—he who, when a price was put upon his head by that King,
was declared a traitor by France, by way of all thanks.

Awkward attempts were for the first time made to play at cards,
which had since a few days been imported by Odette de Champ-
d’Hiver. Wagers of all kinds were made. They drank wines that
came from the finest slopes of the Duchy of Burgundy. The ring was
heard of the Tenzons, the Virelays of the Duke of Orleans, one of the
Knights of the Fleurs-de-Lys who doted most upon beautiful rhymes.
They discussed fashions and armour; often sang dissolute couplets.

Bérénice Escabala, the daughter of that man of wealth, was a
charming child, and exceeding fair to look upon. Her virgin smile
attracted the most brilliant of the swarm of noblemen. It was notori-
ous that she extended to all indifferently the same gracious reception.

One day it happened that a young lord, the Vidame of Maulle, who
was then Queen Ysabeau’s favourite, rashly pledged his word (after
drinking, assuredly!) that he would triumph over the inflexible inno-
cence of this daughter of Master Escabala; in short, that she should be
his within an approximate time.

This boast was hazarded in the midst of a group of courtiers.
Around them stirred the laughter and the refrains of the time; but the
hubbub did not drown the young man’s reckless phrase. The wager
was accepted to the clinking of wine-cups, and came to the ears of
Louis of Orleans.

Louis of Orleans, brother-in-law to the Queen, had been distin-
guished by her, in the early days of the Regency, with a passionate
affection. He was a brilliant and frivolous prince, but of most evil
omen. Between him and Ysabeau of Bavaria were certain parities of
nature which likened their adultery to incest. Beside the capricious
aftermath of a withered love, he was still able to command in the
Queen’s heart a sort of bastard attachment more of the nature of a
compact than of sympathy.

The Duke kept a watch upon the favourites of his sister-in-law.
When the lovers’ intimacy seemed to threaten the influence which
he was determined to retain over the Queen, he showed little scruple in
the

the means he employed to produce between them a rupture which
was nearly always tragic. He would even stoop to play the informer.

And thus he took care that the observation aforesaid was carried to
the Vidame of Maulle’s royal paramour.

Ysabeau smiled, jested at the remark, and seemed to give it no
further thought.

The Queen had her seers, who sold her the secrets of the East,
potent to feed the flame of the desires she inspired. A new Cleopatra,
she was a tall, listless woman, fashioned to preside over courts of love
in some remote manor, or to set the mode to a province, rather than to
plan how to free the soil of the country from the English. On this
occasion, however, she consulted none of her seers—not even Arnaut
Guilhem, her alchemist.

One night, not long after, the Lord of Maulle was with the Queen
at the Hôtel Barbette. The hour was late; the fatigue of their pleasure
was lulling the two lovers to sleep.

Suddenly Monsieur de Maulle seemed to hear, within Paris, the
sound of bells tolled with infrequent and solemn strokes.

‘There must be a house on fire.’

‘I was just dreaming of it,’ said Ysabeau.

The fair sleeper’s lips parted in a smile of pearls.

‘And more,’ she continued; ‘in my dream, it was you who had lighted
it. I saw you fling a torch into the oil and fodder cellars, sweet heart.’

‘Yes! . . .’ (She drawled the syllables languidly.) ‘You were
burning the house of Messire Escabala, my steward, you know, to win
your wager of the other day.’

The Lord of Maulle half opened his eyes, seized with vague distrust.

‘What wager? Are you not asleep yet, beautiful angel mine?’

‘Why, your wager that you would be the lover of his daughter,
little Berenice, who has such beautiful eyes! . . . Oh! what a sweet
and pretty child, is she not?’

‘What are you saying, dear Ysabeau?’

‘Do you not understand me, my lord? I was dreaming, I said, that
you

you had set fire to my steward’s house to carry off his daughter during
the conflagration, and make her your mistress, and win your wager.’

The Vidame looked about him in silence.

The glare from a lowering distance lighted up the window-panes of
the chamber; purple reflections tinged with blood the ermine of the
royal bed; the lilies on the escutcheons and those breathing their
last in vases of enamel blushed red! And red, also, were the two
goblets, upon a credence-table laden with wines and fruits.

‘Ah! I remember . . .’ murmured the young man. ‘It is true; I
wished to draw the attention of the courtiers towards that little one in
order to divert them from our happiness! . . . But see, Ysabeau; it
is really a great fire . . . and the flames rise from the direction of the
Louvre!’

At these words the Queen raised herself upon her elbow, silently
and very fixedly contemplated the Vidame of Maulle, shook her head;
then, lazily smiling, pressed a long kiss upon the young man’s lips.

‘You shall tell these things to Master Cappeluche when presently he
breaks you upon the wheel on the Place de Grève! . . . You are a
wicked incendiary, my love!’

And as the perfumes which issued from her eastern body bewildered
and scorched the senses till the power to think had fled, she nestled up
against him.

The tocsin continued; they distinguished afar the shouts of the
crowd.

‘They would first have to prove the crime.’

And he returned the kiss.

‘Prove it, naughty one?’

‘Could you prove the number of kisses I have given you? As well
try to count the butterflies that flit on a summer’s night!’

He contemplated this fiery mistress—and yet how pale!—who had
just lavished upon him delights and raptures of most marvellous
voluptuousness.

He took her hand.

‘Besides, it will be very easy,’ continued she. ‘To whose interest
was it to profit by a fire in order to carry off the daughter of Messire
Escabala? Yours alone. Your word is pledged in the wager!

broke out! . . . You see, that is quite sufficient, at the Chatelet, to put
you upon your trial. The inquiry comes first, and then . . . (she
gently yawned) the torture does the rest.’

‘I should not be able to say where I was?’ asked Monsieur de
Maulle.’

‘Of course not; for, King Charles VI. then living, in that hour you
lay in the arms of the Queen of France, child that you are!’

Death, in fact, arose stark and erect on either side of the charge.

‘That is true,’ said the Lord of Maulle, under the enchantment of
the gentle gaze of his love.

He grew drunk with joy; he threw his arm about the young waist
enfolded in her lukewarm hair, red as burnt gold.

They had made music that evening; his dulcimer lay flung upon a
cushion ; a cord snapped all alone.

The sound of the instrument had made him start; the enamoured
are superstitious.

On the morrow the Vidame of Maulle was arrested and thrown into
a dungeon of the Grand Châtelet. The trial commenced on the charge
foretold. All happened exactly as predicted by the august enchantress,
‘ whose beauty was so great that it was destined to outlive her passions.’

It was impossible for the Vidame of Maulle to find what lawyers
call an alibi.

After the preliminary investigation, ordinary and extraordinary, he
was cross-examined and sentenced to be broken on the wheel.

The punishment of incendiaries, the black veil, and so forth . .
nothing was omitted.

Only, a strange incident took place at the Grand Châtelet.

The young man’s counsel had become deeply attached to him; and
his client had confessed everything to him.

Knowing the innocence of Monsieur de Maulle, his defender was
guilty of an act of heroism.

On the eve of the execution, he came to the condemned man’s
dungeon and helped him to escape beneath the shelter of his gown.
In short, he put himself in his place.

Was his the noblest of hearts? Or was he an ambitious man
playing a terrible part? Who shall ever tell?
Broken

Broken and burnt by the torture, the Vidame of Maulle crossed the
frontier and died in exile.

But the counsel was detained in his place.

The paramour of the Vidame of Maulle, when she learnt of the
young man’s escape, experienced only a feeling of exceeding vexation.

She refused to recognise the defender of her lover.

So that the name of Monsieur de Maulle might be erased from the
list of the living, she ordered the execution of the sentence even so.

Whence came that the counsel was broken on the wheel upon the
Place de Greve, in the place and instead of the Lord of Maulle.

Pray for their souls.