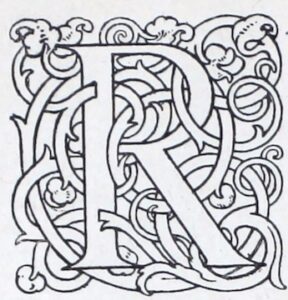 ‘Yes, Lady, I remember it now,’ said the
boy, hesitatingly.

‘Listen, my Lord. You were saying
that no woman had ever composed a good
tune, though ’tis every woman’s business to
play. I could touch it lightly on the string
myself were it not that I’ve hurt my finger with a plaguy tapestry
needle. But I am minded to show you a piece of my teaching also.
Fantasio can’t play as Peter does, but Peter was a Court minstrel.
Why don’t you play, boy?’

For answer came a queer sound from the page’s throat, and an
instant tinkle of the chords. Trembling was the little hand that held
the neck of the cithara, and the fingers of the other wavered as they
pulled at the tight lines, now firmly, now feebly. And as the Fa-la-
fa-la-la hovered over the still water, a long trumpet-call floated through
the air from the castle tower far away across the sand-flats, with a dis-
cordance sufficiently potent to hurt the Lady Joana’s melody.

At her order then he stopped for an interval, and the slow oars
dipped sluggishly. Once more the far trees on the edge of the cham-
paign seemed to move; once more they passed, one in front of another;
once more the low sound of spent waves turning on the beach was lost
in the gurgle at the boat’s prow; once more the two squires chattered,
in tones becomingly subdued, to the two waiting-maids as the keel
glided over the shallows.

Far out to sea lay the same slumbrous level, a wonderful shining
floor of tinted silver it seemed as the light flashes of purple came at
times over its dull gleam of gradual blue. There were tawny regions
for miles round the solitary boat, tawny regions of shoal and quicksand,
which melted away into the warm greyish-green of the deeps. And
over all—shallows and deeps—lay the same great peace, until the eye
wandered past one ship lying becalmed and faint, like a summer ghost
of some butterfly dead too soon; past the warm white spot of its distant
sails . . . to the horizon, whose sharp edge would seem to show that
some breeze was passing along it to the unseen countries of the newly-
found West. A dot was on that line, and the dot moved. Mayhap it
held

held a band of fiery spirits, who were off on the quest for Eldorado,
mayhap only a cautious crew of merchantmen,—still it moved. But
here all life had become smoothed into a long pause: the white ship
lay motionless, the clarion’s call died away, the water never stirred,
but only slept and shone, the sigh of waves on the sandy shore was as
the scarce-heard breathing of a girl’s repose. . . .

‘They have done with their noise,’ said Lady Joana. ‘So play my
tune again, Fantasio, and do it better.’

He had control of himself now, and the dancing notes poured
merrily forth as his nimble fingers shifted over the instrument. Light
and gay it was, this melody of a woman’s composing, and it set one’s
blood on tip-toe with its frolicsome thrill. The women tapped their
shoes instinctively as a current of dance tingled in heel and sole; the
men tattooed with their fingers on the plank. Lady Joana laughed,
they all laughed, and the sound of their laughter blending with the
sigh of the shore seemed to take a dreamy pleasantness that was the
expression of a universal harmony, lying lightly on the shallows.

‘You do not say what you think of it, my Lord.’

‘Faith, I hardly know what to say,’ replied the young noble, beating
about in the thickets of his mind for a courtly compliment, for he felt
the responsibility of keeping up the Court’s reputation. Alas! it was
a pseudo-glory, the halo of a gay place surrounding the dullest and
most cloddish of its frequenters; but then these country people expected
wit from him, so he must make a great effort, for he did not wish to lose
lustre in the lady’s eyes.

‘Faith, . . . it is the brightness of your mind which dazzles my dis-
cernment. It is as though all the groves of Arcadia were open to be
seen, and the sheep cast off their nature and danced with their fair
mistress. It’s such a . . . such a tune as Phoebus might have invented
to charm the frowns of the Muses into smiles . . . it is a music that
might be the very food of love. . . .’

Lady Joana drank it in with pleasure. Her looks said ‘More!’ but
Lord Bertram could not gratify her; he only continued that it was very
pretty, it was vastly pretty, that it could not but please hugely every
one who had the good fortune to hear it.

As he said this his eye fell on the page, who still wrought at the
melody with bent head, hiding as well as he could the woebegone
look which he felt to be evident on his face. Suddenly Lady Joana
spoke,

spoke, and the sound of her voice caused the boy to wince slightly, as
if he had memories of a clout on the ear. But it was the faintest shade
of a shrink, and for this time groundless. His mistress was ordering
him to play for her singing, with intent to charm Lord Bertram further.

Tinkle-tankle, thrum-thrum—and to the accompaniment of the
sweet notes she carolled forth a ditty of birds and groves, and flowers
and loves, with a little chorus of Down, down, derry-down. As Lord
Bertram, with some pains, accomplished another string of compliments,
again the far clarion-call came across the warm air and water.

‘There are fresh guests,’ said Lady Joana then, with a pleased look
in her eye, ‘and we will be returning to welcome them. So take the
rudder, Hugh.’

While Hugh did his mistress’s bidding, the boy Fantasio grew absent
of mind and touched the strings to a little simple tune, very lightly and
low. Lord Bertram listened, nevertheless, and interrupted him with
praise, saying that it was the best of all he had yet played. But
Fantasio, instead of going on, stopped in confusion, and looked uneasy.
‘Boy,’ said Lady Joana, all at once, ‘play my dance to the men’s oars
as they row!’

And instantly Fantasio obeyed, with the same suggestion of a
shrink. Dip, dip, dip went the blades, and the tune kept time with them.

‘’Twas his own tune, that last,’ whispered the farthest rower to his
neighbour alongside him in the broad boat where two men sat a seat.

‘My Lady is none too pleased, I warrant.’

‘Nay, I like this one also,’ said the other, who had not long been in
this service, ‘a merry tune, that makes me fit to dance.’

‘It is the tune to which poor Jack’s father was beaten out of his life,’
whispered the first man. ‘He offended my Lady somehow, and was
basted to satisfy her, there in the castle-yard. And, being weakly just
then, it finished him next day. Made him spit out his heart in blood.
‘Twas then that Jack came into my Lady’s service, and got his new
name. Therefore he remembers the tune.’

So to the playing of Fantasio the boat glided shorewards, dragging
heavily over the shallows. The party landed and filed over the plain
to the castle, and passed through the great gate.

And when Fantasio had followed his mistress through her greetings,
and had held her train through court and hall and passage, till they
were alone—he and she,—she turned upon him and dealt his head a
heavy blow with her scented fist—another, and another, to which he
submitted

submitted silently. ‘Little, low-bred fellow,’ she said, as she viciously
pinched his ear, ‘this is for being too forward.’

However, when at last she was gone, he rubbed his face quietly and
dried his eyes. Then he took up the cithara, and, peering out to see
that he was quite alone, played softly to himself the thoughts which
came to him in such sorrowful moments—wild little airs and curious
fancies, which were his refuge, his aids to patient silence.

So for a time he forgot that he was here fast bound on the shallows
a servant to the caprices of a vain fine lady.