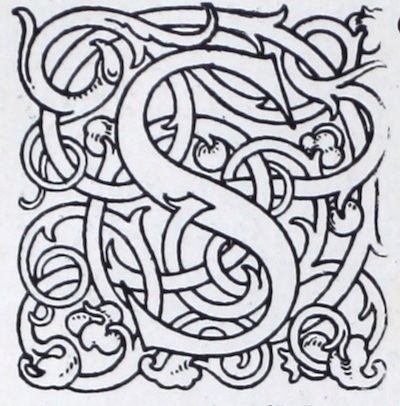 SOHEIL is the Arabic name of the star Canopus,
to which a curious belief attaches. It appears
that in some fashion known alone to Allah,
the fate of the Arab race is bound up with
the star. Where it sheds its light their
empire flourishes, and only there. Why this
is so even faith is powerless to explain, but
so it is.

Doubts and questionings, changes of
costume and religion, striving for ideals, improvements, telegraphs and
telephones, are well enough for Christians, whose lives are passed in
hurry and in hunting after gold. For those who have changed but
little for the last two thousand years, in dress, in faith and customs,
it is enough to know that Soheil is a talismanic star. Let star-gazers
and those who deal in books, dub the star Alpha (or Beta), Argo,
it is all one to Arabs. If you question knowledge, say the Easterns,
it ceases to be knowledge. If this is so, the empiric method has
much to answer for. Knowledge, and virtue, and a horses mouth,
should not pass through too many hands. Even argument itself, that
argument which is almost deified in latter days, when applied too
roughly, takes off authenticity from knowledge, as the bloom of
peaches falls from rubbing in a basket.

Of one thing there can be no doubt whatever. When in the Yemen,
ages before the first historian penned the fable known as history-, the
Arabs, watching their flocks, observed Soheil, it seems to have struck
them as a star unlike all others.

Al Makkari writes of it on several occasions. The Dervish Abder-
ahman Sufi of Rai in his Introduction to the Starry Heavens remarks
that at the feet of the Soheil is seen, in the neighbourhood of Bagdad,
‘a curious white spot.’ The ‘curious white spot’ astronomers have
thought to be the greater of the two Magellan clouds. Perhaps it is so,
but I doubt if the Arabs, as a race, were concerned about the matter,
so long as they saw the star. From wandering, warring tribes,
Mohammed made a nation of them. Mohammed died, and joined the
wife in paradise of whom he said, ‘by Allah, she shall sit at my right
hand, because when all men laughed, she clave to me.’ Then came
Othman, Ali, and the rest, and led them into other lands; to Irak,
Damascus, El Hind, to Ifrikia, lastly to Spain, and still their empire
waxed

waxed even across the ‘Black Waters’ of the seas, and still Soheil was
there to shine upon them. In the great adventure, one of the few in
which a people has adventured, when first Tarik landed his Berbers on
the rock which bears his name; at the battle on the Guadalete, where
the King Don Roderick disappeared from the eyes of men, leaving his
golden sandals by a stream; to Seville, Cortuba, and Murcia, the land
of Trodmir Ben Gobdos to which the Arabs gave the name of Masr,
right up to Zaragoza, Soheil accompanied the host. A curious host it
must have been with Muza riding on a mule and with but two-and-twenty
camels to carry all its baggage. Thence to Huesca of the Bell, where
King Ramiro, at the instigation of good Abbot Frotardo (a learned
man), cut off his nobles heads when they had come to give him their
advice about the celebrated bell, to be heard all over Aragon, across
the Pyrenees to France, to the spot in Aquitaine whence Muza sent to
Rome to tell the Pope he was about to come and take him by the
beard in the name of God. Then the wise men who always march
with armies, looking aloft at night, declared the star was lost. Although
they smote the Christian dogs, taking their lands, their daughters,
horses and gold, on several occasions as Allah willed it, yet victory
was not so stable as in Spain. Perhaps, beyond the mountains, their
spirits fell from lack of sun.

When the conquering tide had spent itself and flowed back into
Spain, at Zaragoza, almost the first Moorish state that rose to eminence
was founded. A1 Makkari writes that at that time Soheil was visible
in Upper Aragon, but very low on the horizon. Again the Christians
conquered, and the royal race of Aben Hud fled from the city. Ibn
Jaldun relates that, shortly after, Soheil became invisible from Zaragoza.
The Cid, Rodrigo Diaz, he of Vivar (may God remember him), pre-
vailed against Valencia, and from thence the star, indignant, took its
departure. And so of Jativa, Beni Carlo, and Alpuixech.

Little by little, Elche with its palm woods, and even Murcia, bade it
good-bye, as one by one, in the course of the struggle, prolonged for
centuries, the Christians in succession conquered southward. At last,
the belief gained ground that, only at one place in Spain, called from
the circumstance, Soheil, could it be seen. At Fuengirola, between
Malaga and Marbella, exists the little town the Arabs called Soheil, lost
amongst sand, looking across at Africa, of which it seems to form a
part; cactus, olive, cane, and date palms form the vegetation; in
summer, hot as Bagdad, in winter sheltered from the winds which come
from

from Christendom by the sierras of the Alpujarra and Segura. Surely
there, the star would stop and let the Arab power remain to flourish
under its influence. There, for centuries, did it stand stationary. The
City of the Pomegranate was founded, the Alhambra, the Generalife,
the brilliant Court; the poets, travellers, and men of science, gathered
at Granada, Córdoba and at Seville. Al Motacim, the poet king of
Cordoba, planted the hills with almond trees to give the effect of snow,
which Romaiquia longed for. He wrote his Kasidas, and filled the
courtyard full of spices and sugar for his queen to trample on, when she
saw the women of the brick-makers kneading the clay with naked feet,
and found her riches but a burden. Averroes and Avicenna, the doctors
of medicine and of law, laid down their foolish rules of practice and of
conduct, and all went well. Medina-el-Azahara, a pile of stones where
shepherds sleep and make believe to watch their sheep, where once
the Caliph entertained the ambassador from Constantinople and
showed him the basin full of quicksilver ‘like a great ocean,’ rose
from the arid hills, and seemed eternal. Allah appeared to smile
upon his people, and in proof of it let his star shine. Jehovah,
though, was jealous. A jealous God, evolved by Jews and taken
upon trust by Christians, could not endure the empire of the Arabs.

Again, town after town was conquered—Baeza, Loja, Antequera,
Guadix, and Velez Malaga, even to Alhama, ‘Woe is me, Alhama’;
lastly Granada. Then came the kingdom of the Alpujarra, with the
persecutions and the rebellions—Arabs and Christians fighting like
wolves, and torturing one another for the love of their respective gods.
The fighting over, tradition said that at Fuengirola the talisman yet
was in view, and whilst it still was seen, there still was hope. A
century elapsed, and from Gibraltar—from the spot where first they
landed—the last Moors embarked. In Spain, where once they ruled
from Iaca to Tarifa, no Moor was left. Perhaps about the mountain
villages of Ronda a few remained, for, even to this day, the peasants use
the Arab word ‘Eywah’ for ‘yes’ in conversation. But they were not
the folk to think of stars or legends, so no one (of the true) faith could
tell if Soheil still lingered over Spain.

Trains, telegraphs with bicycles and phonographs, adulterated
foods, elections, elementary schools, and other herbage (otras yerbas),
give a sort of superficial air of Europe to the land. The palm trees,
cactus, canes, and olives; the tapia walls, the women’s walk and
eyes, the songs and dances, the Paso Castellano of the horses, the
Andujar

Andujar pottery, the norias, and the air of fatalism over all, give them
the lie direct.

The truth is, that the empire of the Arabs, though fled in fact, retains
its influence. The hands that built the mosque at Córdoba, the Giralda,
the Alhambra, and almost every parish church in Southern Spain are
gone; their work is mouldering or struggling with the restorer; and yet
from every ruined aqueduct and mosque they seem to beckon to the
Christian as if derisively. The reason, is it not set forth at length by
economists, ethnographers, tourists, and by those whose business it is to
write, for people who know nothing, of things they do not understand
themselves? The real reason is, because at Cadiz Soheil is still in sight,
though making southward day by day and night by night. That is why
Spain is still an eastern country, and why the ways of Europe have no
real hold upon her. Let her take heart of grace, the precession of the
equinoxes will put things right.

In the dull future, when stucco is our only wear with Harris-tweeds
and macintoshes, when Juan shall be as Pedro, Pedro as John or
Hans or Pierre, and all apparelled in one livery; when trains shall run
up every hill, and Volapuk be spoken from Hammerfest to Cartagena,
Soheil will cross the straits, and all go as it should in Spain, as now it
does in England, where gloom obscures all stars. There still remains
Ifrikia; at Mequinez and Fez, and in the little towns which nestle in the
‘falda’ of the Atlas amongst the cedar forests, it may be that even the
equinoxes may have mercy on Soheil, and let it rest.

Long may it shine there, and shine upon the wild old life, upon the
horseman flying across the sands, upon the weddings where the women
raise the curious cry of joy which pierces ears and soul, upon the solemn
stately men who sit and look at nothing all a summers day, upon the
animals so little separated from their owners, and upon the ocean which
is called the desert.

In the Sahara, Soheil will shine forever upon the life as in the times
of the Mualakat when first the rude astronomers observed the star, and
framed the legend on some starry night all seated on the ground.