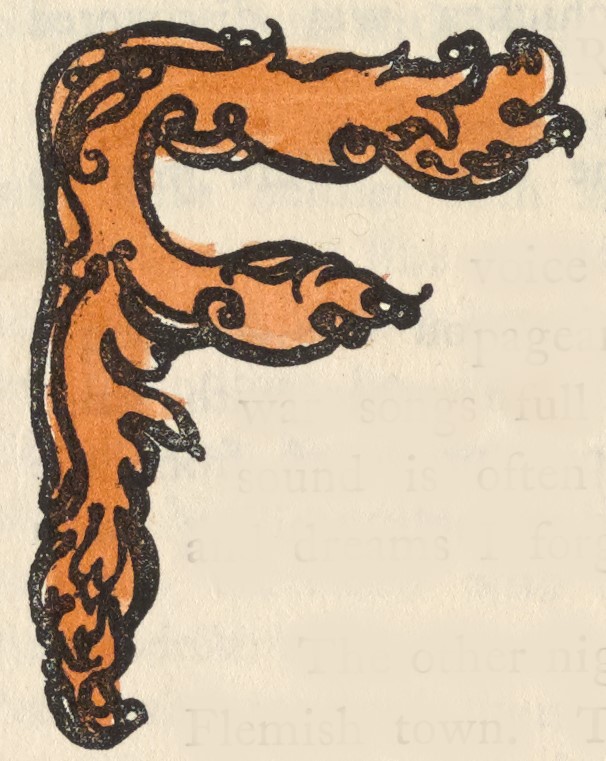 ROM my childhood I have been used to dream of fighting.
The clash of swords, the booming of big guns, the rhyth-
mical tramping of feet, the trumpet, the drum, the master
voice of command, the precise movements of many men, the
pageant of uniforms, ragged or grand, the grumbling of veterans,
war songs full of triumph and sadness—this confused mass of sight
and sound is often the background from which emerge dreams
I remember and dreams I forget.

The other night I was in a large cobbled market-place of what seemed a
Flemish town. Together with some other young officers, I was rollicking in
the Square, the object of our merriment being a large and high scaffold in the centre.
We were making wagers about the victims who were walking up a kind of gang-
plank to place their necks under the knife. I remember thinking we were making
too much noise, when a little man in a gray overcoat began to look at me hard
—to my great discomfort. Feeling those eyes upon me, I ceased to enjoy myself,
and I was hardly surprised when someone clapped me on the shoulder, and told
me roughly that it was my turn. “One rash word has done it,” said the little man
in the gray overcoat …. It was Napoleon.

No guards forced you to walk up the steep gang-plank. It was a question of
honour. I had to go, and all I cared about was that I should walk with dignity
and should not move my head about when the time came to place it for the knife
to fall. I felt it depended on me entirely whether the knife made a clean cut or
not …. and I kept very still, for when you are sure that in a minute you will
feel nothing, it is easy to bear anything …. I heard a musical whizz in the
air … my head was severed clean and fine …. and now for the
first time rage and resentment filled my heart. I was not dead.

I stumbled up. The people round seemed very angry that I was not quicker
in making room for the next man. The top of my neck, where my head had
been, throbbed and burned like the worst gathering you ever had on your finger.
The place was red and raw, but it bled black and it bled slowly. In agony and
anguish, I begged that I might be allowed to go down from the scaffold. But

they told me not to be impatient and forced me to stay and watch the others . . . .
I confess that I now felt some pride at the stillness with which I had met the
knife …. for none of these were still. Their legs twitched, and curled up
like burning feathers as they lay down to place their heads, and they see-sawed
backwards and forwards to such an extent, that the knife made wounds in their
backs, or chopped bits off their hair ….

This horrible sight and my own great pain made me walk but feebly when I
was dismissed from the scaffold …. The crowd roared with laughter as I came
down, and I heard some of them say that I looked funny without my head . . . .
I found refuge in a large empty room with a floor so smooth and so highly polished,
that every picture of its majestic desolation could be seen twice.

There was one bed in the room . . . . I lay down on the floor near it,
hoping that on the icy surface I might find some relief. The man in the bed
stretched out a hand to me, I gripped it and begged him to tell me when I should
be allowed to die . . . .He answered that only one man knew that . . . .
Across the floor stepped that god in the frowsy gray overcoat. I prayed him
that I might die, and that first I might be allowed to write to my mother, for I did
not want her to think worse of me than I deserved.

Napoleon nodded assent with a kind of peremptory irritation …. but
there was nothing small or mean in his impatience.

I followed him into another room, spacious, and furnished with great splendour.
A black servant handed me a quill and I sat down and wrote, nervous because
Napoleon had his eye on me, but determined to be honest …. and not to
cry out …. By this time my headless neck was giving me such torture,
that a cry would have been no great treachery. And I wrote to my dear mother
(who had long been dead) that I had paid the utmost penalty for one rash word,
but that I had kept my head still under the knife, and I hoped she would not
think too badly of me . . . . There was no mercy in Napoleon’s eyes when
I had done, but there was just a fleeting thrill of pride …. and because
it that minute he praised me silently for having kept my head still . . . .
I felt that I had served him, though I was young …. and in great happiness
I began to float upon the viewless wind.