Translated from the Irish by Lady Gregory.

It was on the hill they called Finntulach, the White Hill, the Fianna gathered together
the time they were going to fight the battle of Fintraighe. They often stopped on
that hill for a while, and they had every sort of thing there for food, beautiful black-
berries, haws of the hawthorn, nuts of the hazels of Cinntire, tender twigs of the
bramble bush, springs of wholesome gentian, watercress in spring-time. And there
would be brought to their cooking pots birds out of the oak woods, and squirrels from
Berramain, and speckled eggs from the cliffs, and salmon out of Linnmhuine, and eels of
the Sionnan, and woodcocks of Fidhrinne and otters from the hidden places of the
Doile, and fish from the coasts of Buie and Beare, and dulse from the bays of Clire.

And as they were going out towards Finntraighe they saw one of their young men,
Cael, grandson of Nemhnain, coming towards them. “Where is it you are coming from,
Cael?” Finn asked him. “From the Brugh that is to the North,” said he. “What
were you asking there,” said Finn. “ I was asking to speak with Muirenn, daughter of
Derg, that was nurse to myself.” “For what cause,” said Finn. “It was about a high
marriage, and a sweetheart of the Sidhe that was showed to me in a dream, Credhe,
daughter of the king of Ciarraighe Luachra.” “Do you know this, Cael,” said Finn,
“that she is the greatest deceiver of all the women of Ireland, and there is hardly
a good thing in Ireland but she has it coaxed away to her own house.” “And do
you know what it is she asks of every man that comes to ask for her?” said Cael.
“I know it,” said Finn; “she will let no one come unless he is able to make a poem
setting out a report of her horns and her cups, her grand vessels and all her palaces.”
“I have all that ready,” said Cael; “it was given to me by Muirenn, my nurse.”

They gave up the battle then for that time, and they went on over hilly places and
stony places till they came to Loch Cuire in the west of Ireland. And they came to
the door of the hill of the Sidhe and knocked at it with the shafts of their long gold-
socketted spears. And there came young girls having yellow hair to the windows of
the sunny-houses, and Credhe herself, having three times fifty women with her, came
out to speak with them. “It is to ask you in marriage we are come,” said Finn then.
“Who is it is looking for me?” said she. “It is Cael the brave, the hundred-killer,
grandson of Nemhnain son of the King of Leinster in the East.” “I have heard
talk of him, but I have never seen him,” said Credhe. “And has he any poem for
me?” she said. “I have that,” said Cael, and he rose up then, and he sang his poem.

“A journey I have to make, and it is no easy journey, to the house of Credhe
against the breast of the mountain, at the Paps of Dana; it is there I must be going
through hardships, through the length of seven days.

“It is pleasant her house is, with men and boys and women, with druids and
people of music, with cup-bearer and doorkeeper, with horse-boy that does not leave his
work, with distributor to share food; and Credhe of the fair hair in command over
them all. It would be delightful to me in her house, with coverings and with down, if
she has but a mind to listen to me.

“A bowl she has with juice of berries in it for darkening her eyebrows; crystal
vats of fermenting grains; beautiful cups and vessels. Her house is of the colour of
lime; there are rushes for beds and many coverings of silk and many blue cloaks; red
gold, and bright drinking horns.

“Her sunny-house is beside Loch Cuire, it is made of silver and yellow gold; its
ridge is thatched without any fault, with the crimson wings of birds. The doorposts
are green, the lintel is of silver taken in battle; Crede’s chair, to the left, is the delight
of delights, covered with gold of Elga; at the foot of her pleasant bed it is, the bed that
was made of gold and precious stones by Tuile in the east. Another bed there is to the
right, of gold and silver, made without any fault; curtains it has with the appearance of
the flower of the foxglove.

“The people of her house, it is they that have delight; their cloaks are not faded
white, they are not worn smooth; their hair is fair and curling. Men in their
wounds would sleep hearing the singing of the birds of the Sidhe on the eaves of her
sunny-house.

“If I owe any thanks to Credhe, to whom the cuckoo calls, she will get better
praise again than this; if the love service I have done is pleasing to her, let her not
delay, let her say ‘your coming is pleasing to me.’

“A hundred feet there are in her house from one corner to another; twenty feet
fully measured is the width of her great door; her roof is thatched with the wings of
blue and yellow birds, the border of her well is of crystal and carbuncles. There is a
vat there of the bronze of kings, the juice of pleasant malt is running from it; over the
vat is an apple tree with its heavy fruit. When Credhe’s horn is filled from the vat
four apples fall into it together.”

“She that owns all these things at low water and at flood, Credhe from the hill of
the three paps, she is beyond all the women of Ireland by the length of a spearcast.

“Here is this song for her; it is no sudden bride-gift, no hurried asking. I bring
it to Credhe of the beautiful shape that my coming may be very bright to her.”

After that Credhe took him for her husband, and the wedding feast was made, and
all the Fianna stopped there through seven days, at drinking and pleasure, and in want
of no good thing. 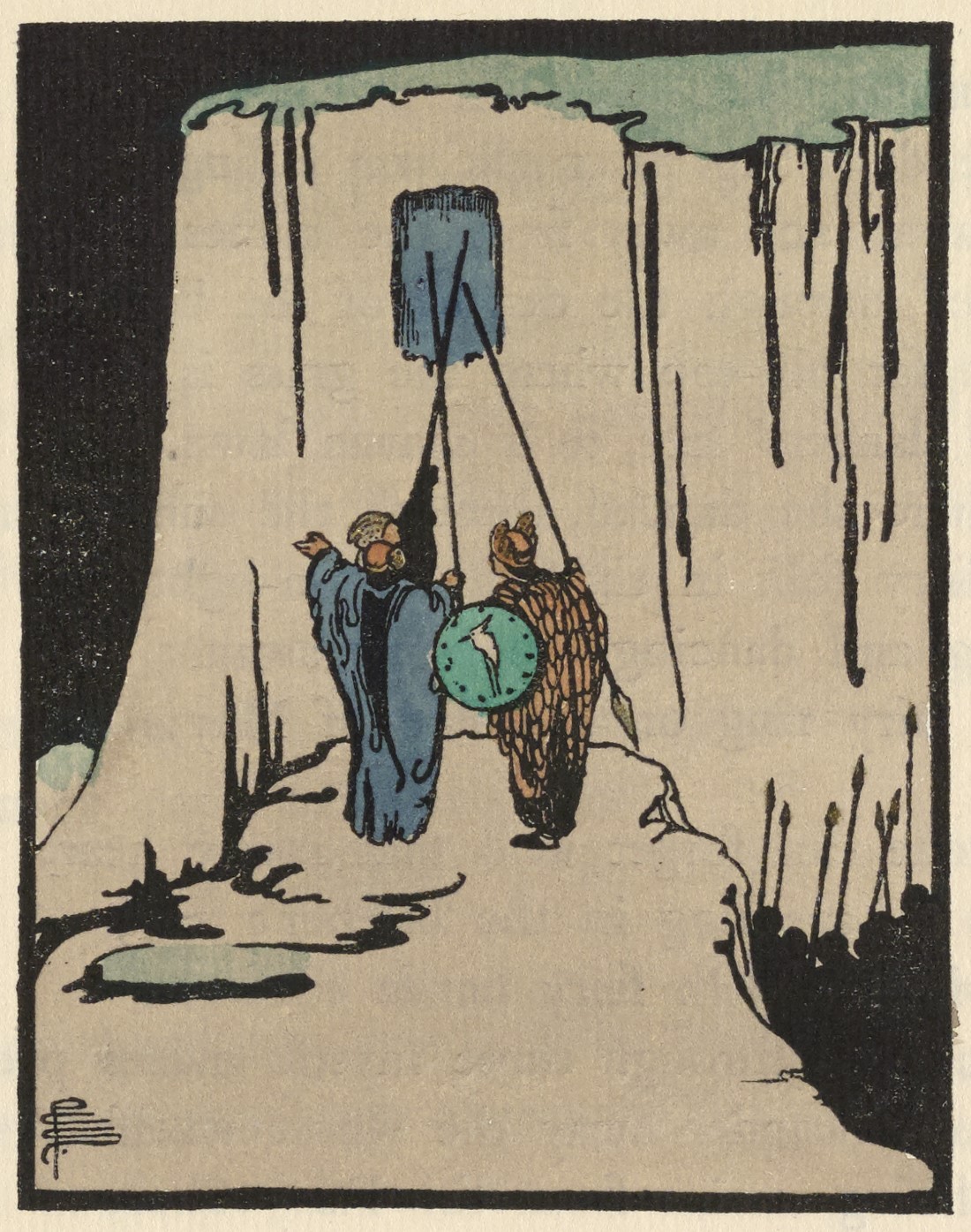