Once upon a time there was an old cheese
maker who had in his care two orphans,
and they all lived in a quiet green valley
high up in the mountains.

Their home was a chalet which stood at the edge of the pine trees. It was
roughly but strongly built of wood, and stained with a rich brown pickle to keep
out the wet.

The orphans, two chubby little boys, were called Philip and Peter. Philip,
the elder by a year, was swarthy like the pines and dark haired, while five-year-old
Peter was as fair as the sun.

One day came toiling up the mountain path that led to the snow beyond,
a traveller—with an enormous white hat. Seeing the old cheese maker busily
churning under the shade of the jutting roof he asked of him a drink of milk.
Whereupon the old peasant went inside, and presently reappeared with some goat’s
milk in a clay bowl, red-glazed and gaily coloured.

The boys who had been playing by the stream that ran down the valley,
came up and eyed—half timidly—half gleefully—the stranger who sat astride the
wood stack that was growing high towards the roof with winter fuel—his wonderful
hat thrown carelessly on the ground. He was looking sad and weary as he glanced
up, but broke into loud laughter at the sight of the barefooted babes in their
blue coats and quaint skull-fitting caps of straw and black velvet with woollen tufts
atop. Children of nature, they were quick to recognise a kindred spirit, and before
long the maker of cheeses left his churning to hold his aching sides and crow
at the unwonted sights he saw.

When evening came the stranger put on his big white hat and swung down
the mountain ; but many were the days he came again, and the boys looked

for his coming with great delight, and he also to finding them. He taught them
games of skill, and how they might waylay the nimble trout. He served them
as a staff for walking, and as a steed for riding. The fine days he beguiled with
play,—the wet with song and story.

Now it so happened, that in spite of all his joy, the stranger was a lonely
man with neither kith nor kindred, and he thought as the autumn drew nigh,
that he would like to take one of the boys to be his son, but such was his love
he could not choose between them. So it befell that on the last day that he came to
see them, ere he went southwards for the winter, he brought with him two
clay money boxes made in the shape of chickens. They were brown in colour
with a blue rosette on the breast and a slit for money in the side. Each side
was also decorated with a design in colour, while the tail was a masterpiece of
the modeller’s art—though little like a tail! He gave one to Philip and one to
Peter who received them with great glee and much lavishing of affection. Then
the man with the hat drew out two silver coins and dropt one into each. For—
thought he—as they use this gift, so shall I be able to judge of their worth.

Whereupon he said farewell to the cheese maker who likewise had a coin—
reluctantly accepted—to slip into the little disused hand-churn that hung beside the
stove and served to keep his frugal store. Then kissing Philip and Peter who
could scarce retain their tears, albeit he promised to come again with the spring,
he went his way.

The snows drew back to their proper and appointed limits on the high
mountains, the fields brought forth their jewels, and the spring came.

Sure enough, too, the man with the white hat came bounding up the mountain
and caught the boys in a long embrace as they stood watching for him by
the stream—now turbid and grey with snow water. When he had shaken the
old peasant by the hand, and drained his bowl of goat’s milk, he sat on the log
stack, small after the winter’s burning, and called Philip and Peter to him.

“Now, Philip, where is your clay chicken?”

Philip, full of a deep mystery, skuttled away and presently returned with a
bundle tied up in a yellow handkerchief spotted with red roses. His baby
fingers fumbled with the knots until suddenly the clay chicken was discovered
shattered in pieces.

The stranger’s eye grew stern. “Why have you done this? Were you so
greedy to get the money?”

“Oh, no! darling Man-with-the-hat. I wanted to give you this—I bought
it of the pedlar yesterday.” The words almost fell over each other with gasps
and spasms of mingled excitement and smiles. He thereupon produced from the
innermost recesses of his garment, a clay cow that stood serenely smiling on a
terra-cotta base that matched her adorning spots.

The stranger turned hurriedly to Peter.

Peter, the faintest suspicion of self-righteousness gleaming in his eye, displayed
his chicken intact and in perfect condition. The stranger’s face fell. He has kept
it thus—he feared—because he is selfish and would hoard it.

“Oh, Mr. Man-with-the-hat, I wanted to buy you a cow like Philip—(surely
a slip)—but I could not break the chicken because it was so beautiful, and because
you giv’d it me!”

What need is there of more? So glad was the stranger with these answers,
that he took the two fatherless ones to be his sons, and lest the cheese maker might
be lonely, he took him also to be his servant, and they all lived happily ever after. 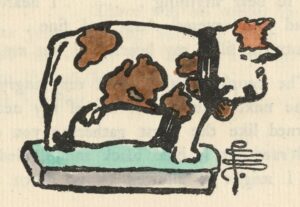