Once there was a young Prince in the East, the heir to a great throne;
he lived in a gorgeous Palace, surrounded by all the delights of the
senses; and the knowledge of the great ills of humanity—of old age,
of sickness, and of death—was most carefully excluded from him. The
fancy took him one day to see what lay beyond the high walls of his
garden; so he sent for his attendants with his bearers, and had himself
borne towards the city. He had not gone far, when he was astonished
to see a bent, weak and toothless figure crouching by the roadside. He
asked what ailed this creature, that he was come to such a pitiable and
disgusting state. He was told that such was the effect time had on
people, that his state must unavoidably come to all alike; and that it was
called old age: that he himself, young and happy Prince though he was,
must in time become such as that which now so startled and disgusted
him. Thereupon he turned back towards the Palace, and, having arrived
there, he locked himself into his own room that he might think over what
he had seen and heard.

But some consoling thought must have occurred to him, for he threw
off his depression, and again on the following day, gay and happy, had
himself borne towards the city. And as he travelled thither, he came
across a worn out, tottering man, who had dim eyes, and was quite
blue in the face, then the Prince asked the nature of this new form of
disgusting wretchedness; and they told him that the man he saw before him
was overtaken with disease, that it might come to any man at any time;
that even he, young and happy Prince tho’ he now was, might fall a
prey to it that very day, and become like the figure that then so appalled
him. Then again he turned back towards the Palace, and he shut
himself in his room and pondered over old age and over sickness.

This time too, some consoling, thought must have come to him, for on the
third day again he started for the third time towards that city. And
anon he saw two men carrying something past him made of boards, and
something covered, but evidently heavy upon the boards. And the Prince
demanded what it was that they were carrying. And he was told that
they were carrying a dead body. Then he came out of his equipage,
and stepped up to the bearers and drew aside the covering. And
he asked what it was made that man look so horrible, and lie so still.
And he was told that never would that man speak or move again; that he
could not see nor hear, nor have sense of anything at all upon the earth.

And from that day this man set himself to destroy the foolish love and
desire for a thing so evidently vain and meaningless as appeared to him
the life of man upon the earth. He had his way fully; men accepted his
teachings and worshipped him under the name of Buddha. 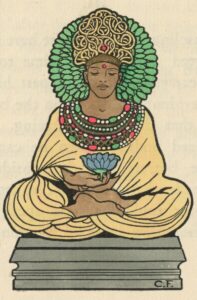